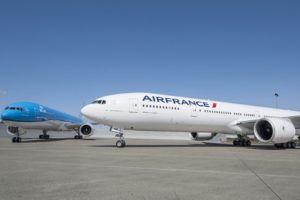 Air France-KLM net profit in the second quarter of 2017 jumped 8.9 times to 367 million EUR from 41 million EUR for the same period a year earlier. The quarterly revenue increased by 6.3% to 6.6 billion EUR, while EBITDA increased by 25.4% to 913 million EUR.

Fixed assets grew due to higher airfares and recovery of demand. In the first half of the year net profit amounted to 151 million EUR compared to 114 million EUR net loss for January-June 2016.

The revenue per air transport unit (the movement of each available passenger seat at a distance of 1 km) increased by 2.2% in April-June after several quarters of decline.

As reported in the Delta press release, the US company intends to buy 10% of Air France shares for 375 million EUR, and China Eastern (a partner of Delta in China) will acquire the same shareholding for the same amount. The expanded joint venture will perform almost 300 non-stop transatlantic flights per day.