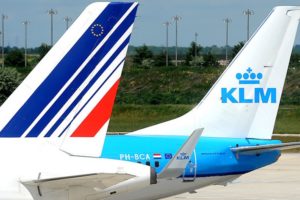 As a result of the fourth quarter, the net loss of Air France-KLM amounted to 977 million EUR against a profit of 362 million EUR an year ago. The adjusted profit per share amounted to 0.05 EUR against a loss of 0.32 EUR for the same reporting period an year earlier. The operating profit rose 1.2 times to 113 million EUR. The quarterly revenues increased by 2.4% to 6.233 billion EUR. The volume of passenger traffic grew by 4.7% to 23.665 million people.

The report notes that the results take into account a significant cost of 1.429 billion EUR due to the write-off related with pension savings. Excluding this, the annual net profit of the company is 1.155 billion EUR, which is 1.5 times more in annual terms.

In 2018, the company expects a positive free cash flow, as well as an increase in fuel costs by 150 million EUR compared to 2017 to 4.7 billion EUR. Air France notes that the global environment remains uncertain due to the overall geopolitical situation and the dynamics of the cost of raw materials.

Air France was formed on October 7, 1933. It is based at the Charles de Gaulle International Airport. In 2004, Air France merged with the airline KLM. The headquarters of the incorporated firm is in Paris.

Newer PostAseman Airlines’ ATR-72 crashed in Iran, killing all the 65 people on board
Older PostAirbus reported high-than-expected profit in 2017