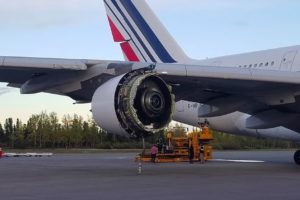 Air France plane Airbus A380 made an emergency landing in Canada after one of its engines failed during an Atlantic crossing. The airplane took off successfully from Charles de Gaulle Airport in Paris to Los Angeles with 497 passengers and 23 crew, but encountered failure in one of the four engines while flying at 37,000 feet near Greenland. The pilots detected the problematic engine and took it off, preventing from more serious accident. The Airbus A380 aircraft headed to Goose Bay Airport on the eastern tip of Canada, where landed safely without reporting injuries among the crew and passengers.

“The regularly trained pilots and cabin crew handled this serious incident perfectly. The passengers are currently being assisted by teams dispatched to the location”, said the official statement of Air France. 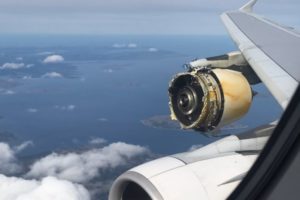 The passenger heard the loud pop and the airplane started vibrating during the flight over Greenland. The vibration took 4-5 minutes until the pilot succeeded to recover the plane, by switching off the engine. The captain announced the people on board for “small engine explosion” and headed to nearest airport with only 3 running engines.

Air France sent two airplanes to transport all the 497 passengers from the troubled Airbus A380 to the port of destination in Los Angeles.

The cause of the problem was unknown. The local authorities, safety inspectors, as well as Air France and Airbus representatives are working on investigation of the accident.

Airbus A380 is a double-deck, wide-body, four-engine jet airliner, which is considered as the world’s largest passenger aircraft. The upper deck of the aircraft extends along the entire length of the fuselage, with a width equivalent to a wide-body aircraft. This gives the Airbus A380 cabin 550 sq m of usable floor space, 40% more than the next largest airliner, the Boeing 747-8. This provides seating for 525 people in a typical three-class configuration or up to 853 people in an all-economy class configuration.