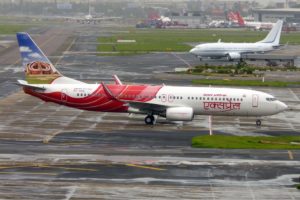 Boeing 737-800 of Air India Express impacted the localizer antenna and an airport wall on takeoff from Tiruchirappalli International Airport, India. The accident happened during takeoff en route to Dubai with 130 passengers and 6 crew, as the underside of the fuselage hit the localizer antenna and a brick wall, causing severe damage to the facility. The crew reported that all the system are normal and there were no indication about problems with the aircraft and proceeded towards Dubai.

“We informed the pilot about the hit”, said the airport director. “The pilot said nothing was wrong with the plane as the systems were functioning normally. But we found some parts of the plane, like an antenna, on the ground”, added he.

Air India Express’ Boeing 737 was about halfway to Dubai when it turned around and headed back to India in what the airline would later call as a precautionary measure. The plane landed in Mumbai about four hours after takeoff, according to Air India’s statement. Serious damages at underside of the fuselage were found and the aircraft Boeing 737-800 was detained for repairs and taken out of service.

The Boeing 737 is a short- to medium-range twinjet narrow-body airliner developed and manufactured by Boeing Commercial Airplanes in the United States.