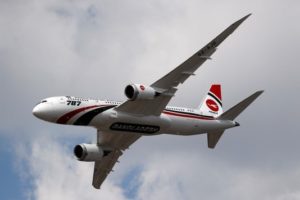 The US airline leasing company Air Lease Corp has announced that posted an order to Boeing for 78 aircraft worth 9.6 billion USD. At a press conference during the Farnborough Airport air show, Air Lease Corp confirmed purchasing of 3 Boeing 787-9, 20 Boeing 737 MAX and 55 Boeing 737 MAXs.

Air Lease said it approached flexibly in taking the 8th and 9th generations of 737 MAX and expects to get the aircraft between 2020 and 2024, although most aircraft will be delivered later.

Separately, Air Lease Chief Executive John Plueger said there was a lot of interest from a number of airlines and the need for a new mid-range airplane.

“There is definitely a strong interest in the global air market to this plane”, said Plueger.

Steven Udvar-Hazy, the Air Lease’s CEO, said later that the choice of a mid-range jet will be one of the most difficult decisions Boeing has to make, adding that “it would be nice” to have a choice between two engines.