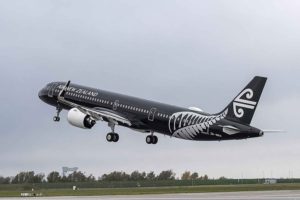 New Zealand airline Air New Zealand received its first aircraft Airbus A321neo. The aircraft is equipped with Pratt & Whitney GTF engines and accommodates 214 passengers with a single-class layout. Airbus A321neo is longer than the A320s used on domestic and short-haul routes. The airplane landed last night with nine staff on board the ferry flight which started at Airbus’ manufacturing plant in Hamburg and flew via Oman, Kuala Lumpur and Cairns.

The aircraft, with the tail registration ZK-NNA, is expected to enter commercial service on November 23, operating flight NZ739 from Auckland to Brisbane.

In total, Air New Zealand will acquire 20 aircraft of the A320neo family.