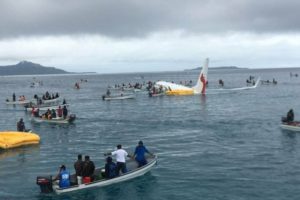 Air Niugini’s Boeing 737-800 landed by emergency in lagoon in Micronesia. The pilot attempted to land at Chuuk International Airport, but during the attempt touched the water and was forced to land in the lagoon. There are no serious injuries among passengers and crew. All the people were rescued by local fishermen and police officers, as the plane was sinking.

The airline said the aircraft, flying from the capital of Micronesia to Port Moresby, “landed a bit off the runway”. “Air Niugini can confirm that everyone on board was able to safely evacuate from the plane”, adds the official statement of the company.

On board there were 36 passengers and 11 crew members. All of them escaped with minor injuries. Eight people were hospitalized at the Chuuk State Hospital. All the patients are males and four of them suffered head injuries, spinal cord injuries and hip fractures.

Within an hour after the crash, the plane sank in the lagoon.