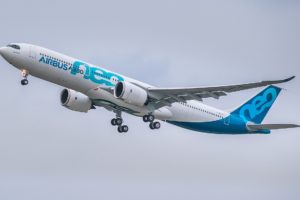 The national airline of Senegal, Air Senegal, has signed a memorandum with Airbus for the purchase of two A330neo aircraft. This agreement makes Air Senegal the first carrier in Africa to choose the A330neo. The agreement was signed at the Airshow Dubai Airshow in the presence of the Minister of Air Transport and Infrastructure Development of Senegal’s airports Maimouna Ndoye Seck.

“Air Senegal will begin operating in 2018, the airline plans to use the A330neo to develop its network of medium and long-range routes”, said the official statement of Airbus.

Air Senegal has not identified which of the two A330neo variants, the -800 or -900, it intends to acquire. However, the airline announced plans to use the Rolls-Royce Trent 7000-powered aircraft to develop a medium- and long-haul network.