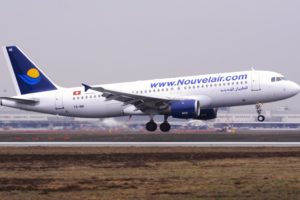 Airbus A320-200 of Nouvelair Tunisie made an emergency landing at the airport of Monastir because of bird strike, which got into the turbine. The airplane with 180 passengers on board was climbing out of Monastir’s runway 25, but following the bird strike suffered problem with engine and returned to the airport. Airbus A320-200 of Nouvelair Tunisie landed successfully and all the passengers were disembarked to the waiting room, until the aircraft was repaired.

The airplane resumed the flight from Monastir (Tunisia) to Saint Petersburg (Russia) and departed 10 hours later. However, a lot of passengers reported that were left stranded at the airport without information, food and water. They complained to the airline officials, but without any response.

Moreover, people on board of the airplane were even not aware that they return to Monastir. However, those who spoke and understood a foreign language, received information from one of the stewards that a bird had got into the turbine and the plane should be checked.

“We were almost 180 people, including 65 children. There were even nine-month-old kids. We all stayed at the transit zone of the airport for 11 hours and no one from the company came”, said of the travelers from the troubled airplane. “We received water at one o’clock in the morning (4 hours after returned to Monastir) and a bit later they gave out coupons for hamburgers. By this time, the only cafe continued to work, with the staff of which did not taken care for a woman who asked for hot tea. The local police tried to intervene, but the conflict all the same brought to naught”, added he.

Later the passengers decided to ask for help in the Russian embassy, but again without any response.

At this time, the airplane was scheduled to fly from Saint Petersburg to Monastir and people at the Russian airport were not aware for the situation and the large delay. Hundred of people were waiting at the airport.