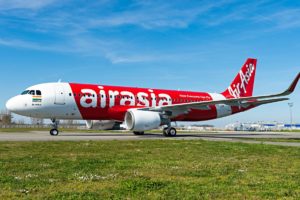 Airbus A320-200 of AirAsia India suffered problems with retracting the landing gear after takeoff from Goa, India. During climbing, en route to Bangalore with 168 people on board, the crew was not able to retract the landing gear due to a hydraulic failure. The pilot abandoned the maneuver and returned to airport of departure. The aircraft Airbus A320-200 landed safely just 25 minutes after takeoff.

There were no injuries or damages reported during the incident. All the passengers were transferred to the terminal, where some were rebooked for other flights.

The aircraft was repaired and inspected, reaching Bangalore with delay of 13 hours.

The Airbus A320 family consists of short- to medium-range, narrow-body, commercial passenger twin-engine jet airliners manufactured by Airbus. The A320 has reased fuel capacity for increased range. Indian Airlines used its first 31 A320-200s with double-bogie main landing gear for airfields with poor runway condition which a single-bogie main gear could not manage. Powered by two CFM International CFM56-5s or IAE V2500s with thrust ratings of 98–120 kN (22,000–27,000 lbf), its typical range with 150 passengers is 3,300 nmi / 6,100 km. A total of 4,512 of the A320ceo model have been delivered, with 220 remaining on order as of 30 September 2017. The closest Boeing competitor is the 737-800.