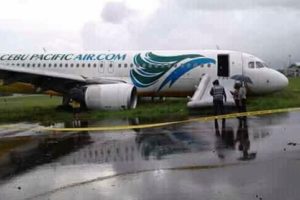 Cebu Pacific Air plane Airbus A320-214 suffered runway excursion during landing at Iloilo Airport in Philippines. The aircraft with 180 passengers on board ran off the left side of the runway and stopped on the soft ground, about 1200 m from the track threshold. Following the accident the front landing gear collapsed and the nose slid on the ground. All the people were evacuated through the escape slide of the right hand forward door. Fortunately during the accident there were no reported serious injuries and casualties.

After the runway excursion at the scene were sent firefighting teams and rescuers, which assisted the troubled passengers and transferred them by bus to the terminal.

The investigation for the root cause of the accident is under way. According to the officials the runway excursion occurred in bad weather conditions with notable rainfall and strong winds, which might be the reason for the aviation crash.

Airbus A320 is short- to medium-range, narrow-body, commercial passenger twin-engine jet airliner. The aircraft has length of 37.57 m, wingspan of 35.80 m and wing area of 122.40 sq m. Ever since Airbus launched its single-aisle jetliner family with the A320, it has set the standard as the world’s most comfortable short-to-medium-haul aircraft – which is just one of the many reasons why it’s also the most successful aircraft of all time. Incorporating a versatile cabin that can be configured for a variety of seating options, the A320 usually seats 150 passengers and has a maximum capacity to accommodate as many as 180 travellers.