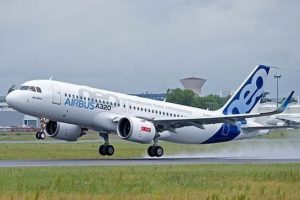 The Russian Federal Air Transport Agency and the Aviation Register of the Russian Federation have completed the procedure for validating the type certificate for the Airbus A320neo family. Relevant supporting documents were handed over to the aircraft manufacturer.

“The type certificate applies to A320neo and A321neo aircraft equipped with both types of engines (Pratt & Whitney’s Pure Power PW1100G-JM and CFM International’s LEAP-1A). Obtaining a type certificate from the Russian aviation authorities is an important step in the introduction of commercial aircraft for the A320neo family In Russia. The first operator of this type in Russia will be S7 Airlines”, said Airbus in official statement.

Airbus A320neo is a remotorized version of the A320 family. Thanks to the engines of the new generation, as well as the new wing tips, the Sharklets managed to reduce fuel consumption by 15% from the first day of operation and by 20% by 2020. The commercial operation of the A320neo began in 2016.

The A320neo family is the most commercially successful in the world, and since the launch of the program in December 2010, more than 5,000 orders from 92 customers have been received, representing about 60% of the market for equipment sales in this class. Thanks to the wider fuselage section of the A320, the A320neo can accommodate in the cabin six 18-inch seats in a row, offering passengers more comfort in any class of service. The aircraft of the A320neo family are also the quietest twin-engine aircraft in the world.