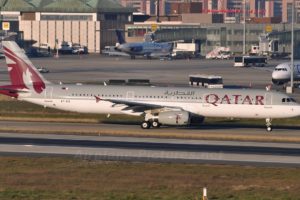 Airbus A321 of Qatar Airways caught fire during maintenance at Doha-Hamad International Airport. The aircraft was parked on remote stand Q40, but during works on the outside hull, the in-flight entertainment (IFE) satellite antenna caught fire. The flames extended to the cabin, but the accurate and fast reaction of the airport firefighting teams saved the aircraft from total loss. The fire was extinguished but the roof was burnt through and the cabin suffered severe damage.

“Whilst there was some damage to the aircraft there were no injuries. A full investigation is being conducted by the local authorities to establish the cause. Traffic at Doha-Hamad International Airport was not affected and is running as normal”, says the official statement of Qatar Airways.

There were no reported injuries. The local authorities initiated investigation for the root cause of the accident.

Airbus A321 is a member of the Airbus A320 family of short- to medium-range, narrow-body, commercial passenger twin-engine jet airliners manufactured by Airbus. It was the first derivative of the baseline Airbus A320 aircraft, and carries up to 236 passengers with a maximum range of 3,200 nmi (5,900 km; 3,700 mi). The final assembly of the aircraft takes place in Hamburg, Germany, or Mobile, Alabama. The A321 is a stretched-fuselage variant of the Airbus A320 and entered service in 1994. The aircraft shares a common type rating with all other Airbus A320 family variants, allowing existing A320 family pilots to fly the aircraft without the need for further training.