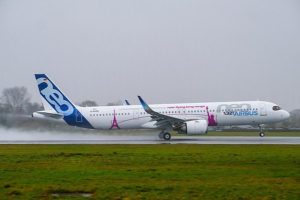 Airbus A321neo LR (long range) successfully completed its first flight in Hamburg. The A321LR flew from Finkenwerder airport, located on the territory of the Airbus plant, and spent a total of 2 hours 36 minutes in the air. This flight marked the beginning of the A321neo test flight program. The test aircraft (factory serial number MSN7877) is equipped with CFM LEAP-1A engines.

“During the first flight the aircraft had two test pilots, while four test engineers monitored the operation of all the aircraft systems for special engineering stations installed in the cabin. In the A321LR test flight program are planned about 100 hours in the air, as well as transatlantic flights. The certification of A321LR by European and American aviation authorities is scheduled for the second half of 2018, while commencement of commercial operation for the fourth quarter of 2018”, said the official statement of Airbus.

The configuration of the Airbus A321neo LR involves changing the location of the doors and emergency exits, which will increase the capacity of the aircraft to 240 passengers in a one-class arrangement. The new passenger cabin Airspace will offer passengers on board even more comfort. Due to the increased take-off weight by 97 tons and the third additional fuel tank, the A321LR will be able to fly at a range of up to 7,400 km.

“With the latest generation of engines, aerodynamic improvements and passenger compartment modifications, the A321neo will allow airlines to reduce fuel consumption by 20% by 2020. Airbus has received over 1,900 orders from more than 50 customers for the A321neo, which accounts for approximately 80% of the market for machinery sales in this class”, says the statement of the European aircraft manufacturer.