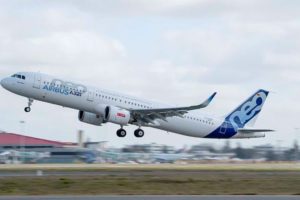 Airbus A321neoLR (long-range), modification of the A320neo family with increased range, set a new flight range record. The plane made a non-stop flight between the Seychelles (Mahe Island Airport) and Toulouse (Blagnac Airport), after spending about 11 hours in the air.

“The actual distance between these airports was 7,600 km, but given the headwind and other factors, the traveled distance was about 8,700 km. Thus, the A321neoLR broke its previous flight range record set on February 13 when it performed a non-stop flight from Paris to New York, length of about 7400 km. The test aircraft was equipped with CFM LEAP-1A engines and three fuel tanks. The flight simulated the weight of 162 passengers in addition to the 16 crew members who were on board during the flight”, says the statement of Airbus.

This flight was made as part of the certification testing program A321neoLR, during which the aircraft will fly about 100 hours. Certification A321LR is scheduled for the second half of 2018, while commissioning for commercial operation for the fourth quarter of 2018.

The configuration of the A321neoLR involves changing the location of the doors and emergency exits, which will increase the capacity of the aircraft to 240 passengers in a one-class arrangement. The new passenger cabin space will offer passengers on board even more comfort. Due to the increased takeoff weight of 97 tons and the third additional fuel tank, the A321neoLR will be able to fly at a range of up to 7,400 km. Thanks to the engines of the latest generation, aerodynamic improvements and passenger compartment modifications, the A321neo will allow airlines to reduce fuel consumption by 20% by 2020. Airbus has received over 1,900 orders for A321neo aircraft, which accounts for approximately 80% of the market for machinery sales in this class.