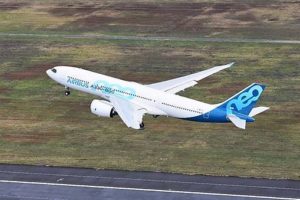 The prototype aircraft Airbus A330-800neo made the first test flight, taking off from airport in Toulouse, France.

“The aircraft A330-800neo with the board number F-WTTO (registration number MSN1888) took off at 10:31 local time. The plane was piloted by test pilots Malcolm Ridley and Francois Barre. The crew also included of three test engineers. The flight test program for the Airbus A330-800neo aircraft includes about 300 flight hours. The certification of the aircraft should be completed in 2019”, said the official statement of Airbus.

One of the main differences from the classic A330 version of the aircraft is the installation of a new engine Rolls-Royce Trent 7000, which will reduce fuel consumption by 14%, operating costs by 8%, the amount of air emissions by at least 10% and reduce the noise level compared to with classic models of the A330 series. In addition to modern engines, this family will receive an improved aerodynamic layout, a new design of the passenger compartment and wing tips like the Sharklet.

Passenger capacity in the standard two-class Airbus A330-800neo layout will be 257 seats.