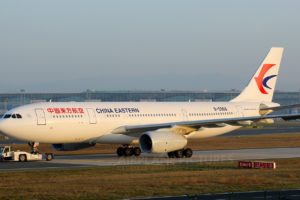 Airbus A330 of China Eastern Airlines emergency landed on Sydney Airport after engine failure shortly after takeoff. The airplane started climbing but at height of 5000 ft left hand engine (Rolls-Royce Trent 772) faulted and pilot was forced to shut if down. The crew turned back and safely landed on runway 34L about 40 minutes after departure. There were no reported injuries and no damages to the airplane itself.

After landing the inspectors and crew saw a large hole at the inboard side of the left hand engine’s intake. The local authorities and aviation safety inspection initiated investigation for the root cause of the accident.

All the passengers were transferred to another flight and substitute airplane. However, Sydney International Airport is working with some delays due to heavy fog.