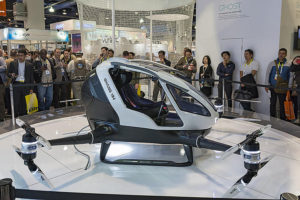 The Japanese government decided to take seriously the implementation of the concept of flying cars and created the corresponding program, enlisting the support of representatives of Airbus, Boeing and Uber.

The group on the development of flying taxis will include specialists from more than two dozen companies. On August 29th the meeting of the group members will take place, at which further plans will be specified.

The Government of Japan will provide the project with all necessary support. In particular, the legislators will create rules governing the operation of flying machines. It is assumed that the first flying taxi will appear in the airspace of the country during the next decade.

Projects for building aerotaxi are not initiated only in Japan. In 2017, in Dubai, had been conducted testing of a flying car from the company Volocopter. At the beginning of this year, the first flight of the prototype of its air taxi was made by Airbus, then the successful start of the testing of passenger drones was announced by the start-up Ehang. The development of a flying taxi is also carried out by Uber.