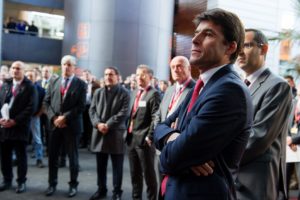 Airbus appointed Bruno Even as general manager of helicopters division. He will take office on April 1, 2018. The 49-year-old Bruno Even will report directly to the CEO of Airbus, Tom Enders, and will join the company’s executive committee.

Bruno Even switches to Airbus from Safran, where he worked as the general director for the development of the business of helicopter engines since 2015. He will replace at the post Guillaume Faury, who will take office as president of commercial aircraft units next week.

“I’m glad that we managed to attract such an experienced leader to the Airbus team as Bruno Even”, said the CEO of Airbus, Tom Enders. “Bruno reached a leadership position at Safran at a young age. Extensive experience in the helicopter business, customer orientation and skills in project management and engineering make Bruno an ideal successor to Guillaume Fori and will allow him to continue working on the successful development of the company in a difficult business environment”, added he.

Bruno Even, a graduate of the Polytechnic School in France, joined the French Ministry of Defense in 1992, where he was responsible for the development of the space components of the Helios II satellite. In 1997, Bruno Even joined the Ministry of Foreign Affairs as a technical adviser to the Director for Strategy, Security and Disarmament. Since 1999, he has held a number of senior positions, including the executive vice president of maintenance and services at Safran Helicopter Engines (formerly Turbomeca). From 2013 to 2015, Mr. Even served as CEO of Safran Electronics & Defense (formerly Sagem).

Newer PostPoland builds a new international airport
Older PostAseman Airlines’ ATR-72 crashed in Iran, killing all the 65 people on board