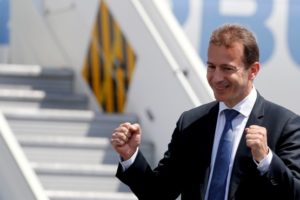 The board of directors of the European aircraft manufacturer Airbus appointed Guillaume Faury as its next CEO, who will be replace Tom Enders on April 10, 2019. Guillaume Faury heads the Airbus Civil Aircraft Division and will inherit the 59-year-old Tom Enders as Group Chief Executive, the board said.

The change comes at times of increasing orders for aircrafts, with more than 7,300 orders, equivalent to nine years of production. Airbus secured 1,109 aircraft orders in 2017, nearly 200 more than Boeing. Airbus, however, has difficulty in making some aircraft, causing supply delays and dissatisfaction of customers.

The company has promised to produce around 800 aircraft this year. But achieving this goal remains a challenge because of delays in delivering engines for the popular A320neo. At the end of September, the company did not reach its 300 aircraft to fill its number for the year.

Airbus has had a strong run this year, with its stock up 25% since January. But the company is facing challenges that will require the licensed flight test engineer to quickly get up to speed.