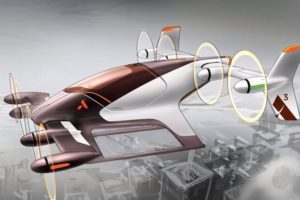 The division A3 of the European aircraft manufacturer Airbus almost completely assembled the body of the prospective air taxi of the Vahana project. It will soon begin installing on-board systems, batteries and electric motors on the apparatus. Airbus plans to start the tests of the fully assembled sample at the end of 2017.

The development of the air taxi of the Vahana project began in February 2016. The aircraft with vertical take-off and landing will be made according to the scheme of an envelope with front and rear turning wings. On the consoles of each wing will be placed four electric motors with air screws. The aircraft is supposed to be made unmanned.

According to preliminary plans, Vahana will transport either one passenger or some cargo. The unmanned plane will be equipped with a system of avoidance of collision with obstacles and other aircraft. Performing flights of air taxi will be strictly on predetermined routes, slightly deviating from them only in case it is required to avoid a collision.

At present, A3 is assembling a demonstrator of technologies for a new taxi. Already assembled body is almost entirely made of carbon fiber. The rapid prototyping of the elements of the hull of the air taxi is done by the American company FlightHouse Engineering.

It is expected that the demonstrator will be tested for three months. They are planned to be completed by a full-fledged flight, during which the device will have to fly upright, go into a horizontal flight, evade an unexpected obstacle, go into a vertical landing mode, evade an obstacle on the ground and land.

For avoiding obstacles in the air and on the ground, Vahana’s aerotaxi will be met by a system that includes a radar, a lidar and electron-optical cameras. Lidar will be needed to detect obstacles on the ground.

At the beginning of May this year, the American company Aurora Flight Sciences tested an air taxi model developed for Uber Technologies under the Uber Elevate program. The size of the tested model of the aircraft with vertical take-off and landing made up a quarter of the planned size of the production car. The carried out checks were recognized as successful. A promising air taxi, developed by Aurora Flight Sciences, will receive an airframe with a straight wing. This body will be located on a frame with two long beams attached to the lower arms of the wing. Each of the beams will have four rotor screws. In the tail part of the beams will be installed keels.