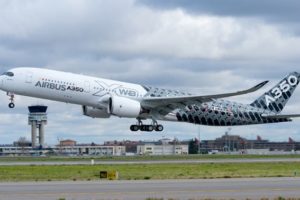 Airbus assembled its first A350 XWB with extended range (A350 Ultra Long Range) in the plant in Toulouse, France. This is the newest version of the A350 XWB family, which which was specially ordered by Singapore Airlines. In total, the airline has ordered seven A350-900 Ultra Long Range aircraft, which this year will start operating on flights from Singapore to the US, among which will be the world’s longest commercial flight Singapore-New York.

“The next stage of the production process will be comprehensive static testing of the assembled aircraft, after which the engines will be installed on it. To begin the flight test program, within which it is planned to certify the modifications of this modification: a modified fuel system that allows increasing the fuel capacity of tanks by 24,000 liters, as well as modified wing tips that will further improve aerodynamics”, says the official statement of Airbus.

With a maximum take-off weight of 280 tons, the Airbus A350 XWB Ultra Long Range will be able to fly to a distance of up to 15,600 km or a duration of approximately 20 hours, offering operators the best balance of fuel efficiency and passenger comfort.

In total, Airbus received 854 orders from 45 customers for the A350 XWB family.

The Airbus A350 XWB is a family of long-range, twin-engine wide-body jet airliners. The A350 is the first Airbus aircraft with both fuselage and wing structures made primarily of carbon fiber reinforced polymer. Its variants seat 280 to 366 passengers in typical three-class seating layouts.