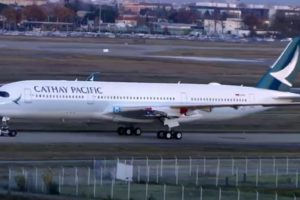 European airplanes manufacturer Airbus was awarded with solid order by the Cathay Pacific Airways. The Hong Kong carrier entered into a non-binding preliminary agreement to buy 32 airplanes A321-200neo. The jets, scheduled to be delivered between 2020 and 2023, carry a list price of 127 million USD each, excluding discounts that are customary for huge orders. The total price per catalog amount to 4.1 billion USD.

However, it is widely known in the industry that large orders have serious discounts on value. And Cathay Pacific explained that it would pay less than the list price.

The airplanes have to be delivered between 2020 and 2023 and will be used by the sister airline Cathay Dragon.

“The substantial investment we are making in new aircraft underlines our confidence in the future of the Cathay Pacific Group, as well as our commitment to bolstering Hong Kong’s position as Asia’s largest international aviation hub”, said the CEO of Cathay Pacific Airways, Rupert Hogg.

Only a week ago, Cathay Airways announced its highest half-year loss of at least two decades. The company suffers from strong competition from low-budget companies.