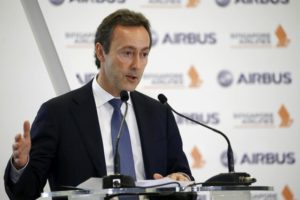 The European aircraft manufacturer Airbus confirmed about departure of chief operating officer Fabrice Bregier, who also heads Airbus Commercial Aircraft. He will leave this post in February 2018 after the board refused to support his attempt to become chief executive. He will be replaced by Guillaume Faury, head of Airbus helicopters, in the subordinate position as president of the commercial aircraft division.

At the same time, the corporation announced that the current term of Airbus CEO Tom Enders will not be renewed upon the completion of his term of office in April 2019. The company will examine CEO candidate inside and outside Airbus with the goal of announcing a pick at the annual shareholder meeting in 2019.

Changes in the top management of the corporation are connected with two major scandals that broke out this year. Currently, France and the United Kingdom are investigating on suspicion of violation of the rules of cash transfers for a number of transactions, details of which are not reported.

The aircraft manufacturer provided the information about the violations of the law itself, informing the supervisory authorities on the results of the internal audit, hoping to mitigate the penalties in accordance with the relevant provisions of the “Sapin Law”. However, the investigative authorities found violations too serious: in this case, the French and British side of the corporation may face a fine between 1 billion EUR and 6 billion EUR.

The Law on the Prevention of Corruption, on the Transparency of Economic Life and on Public Procurement Procedures (the “Sapin Law”) was adopted by the French Parliament on January 29, 1993. The most important part of it is provisions for the possibility of refusing to prosecute violators (individuals and legal entities) in the event of their own reporting of such violations to the supervisory bodies, and in this case a significant mitigation of the penalty may be made.

In February 2017, the Austrian Ministry of Defense submitted an application to the Vienna Prosecutor’s Office and demanded 183.4 million EUR from Airbus for intentional fraud in the purchase of Eurofighter Typhoon fighters in 2003, regarding their purchase price and equipment. As it turned out, the modification of the aircraft sold to the Austrian Air Force did not comply with the declared characteristics. The prosecutor’s office opened a criminal case against Airbus Group and the European aircraft consortium Eurofighter Jagdflugzeug on suspicion of fraud during the contract for the supply of fighters. In this case, Airbus CEO Tom Enders is being held by the suspect, among the defendants, besides him, there are many other high-ranking officials.

The purchase of fighters since the beginning of 2003 was accompanied by scandals related to corruption. The total amount of the transaction in 2003 was 1.96 billion EUR, almost 10% of which went to compensate for the costs of concluding the agreement, but as a result, in the general calculation, this amount was not taken into account. The amount of damage for the country, according to the Minister of Defense, was 1.1 billion EUR.