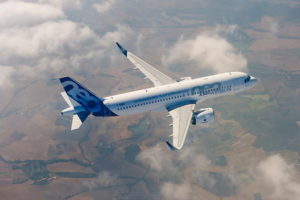 Notable delivery milestones during January included the initial A321neo aircraft to U.S.-based American Airlines (which has 100 on order) and to Cebu Pacific (the largest low-cost carrier in the Philippines).

Also in January, Acropolis Aviation of the UK received Airbus’ first ACJ320neo, with this corporate jet version to undergo its cabin outfitting in Switzerland.

However, Airbus reported the cancellation of orders worth 4 billion USD, dominated by 8 A380 aircraft, highlighting an increasingly bleak picture for the world’s largest airliner as preparations to close production gather pace amid weak demand. Confirming its earlier signals, Australia’s Qantas said it would not take any more of the giant planes and would stick at a fleet of 12 instead of 20 originally ordered.

The cancellation comes after the A380’s largest customer, Emirates, began discussions with Airbus over switching some A380 orders to smaller models after it failed to secure an engine contract for its latest batch of orders.

This week, Airbus is expected to publish its earnings report and provide guidance for 2019.