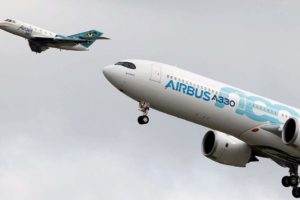 The European aircraft manufacturer Airbus plans to begin installing new passenger modules for the first wide-body aircraft since 2021. The new modules will be designed specifically for placement in cargo compartments or cargo planes.

The first airplane to receive the new modules will be the A330. Later, they will be installed on the aircraft A350.

Airbus modules have been developed by Airbus together with the French company Safran since 2018. As a basis for them, the developers took onboard modules for crew rest, in which pilots and flight attendants can spend their free time during long flights.

Airbus and Safran believe that with the help of new modules, air carriers will be able to expand the list of services provided on board the aircraft. In particular, children’s playrooms, sleeping areas or meeting rooms can be installed in the baggage compartments of the aircraft. The module can be booked by passengers before the flight. Up to four modules can be installed in the luggage compartment of the A330 or A350.

The length of the module for the luggage compartment will be 2.4 meters, width – 4 meters, and height – 1.55 meters. The design of the new modules is designed in such a way that they can be installed immediately when assembling new aircraft or when upgrading existing machines.

Previously, Airbus introduced the concept of Transpose, which implies the creation of various modules for converting cargo aircraft into passenger aircraft. These universal plug-in modules can be installed through loading doors. They can be fastened using a standard load securing system. At the same time, all modules having universal channels for various communications can be connected to each other.

In the cargo compartment of the transport aircraft A330-200F can accommodate up to 12 interchangeable modules. Among them – the standard passenger module with seats, a bar, a gym, a workplace, a sleeping compartment and a game module for children. It is assumed that each of the modules can be equipped with the necessary equipment and furniture in advance in accordance with the planned flight.