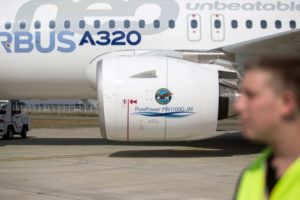 The European aircraft manufacturer Airbus is experiencing new difficulties. The concern has found new problems with the A320 Neo engines that are produced by Pratt & Whitney. The European Aviation Safety Agency has set flight restrictions for affected aircraft. The certification of the engine was taken after a higher than normal number of inflight shutdowns and aborted takeoffs were reported on aircraft using the latest build-standard engines

The problem involves the knife-edge seal in the high-pressure compressor aft hub and can potentially appear on engines starting with serial number P770450.

The Product Safety Boards of Pratt & Whitney and Airbus have decided that all A320 Neo deliveries are postponed till further notice. Airbus and Pratt are working in close cooperation and will be swiftly communicating on the way forward to regain normal operations and resume aircraft deliveries.

For the current fiscal year, Airbus expects to produce and sell about 380 aircraft of the best-selling type. If there is a delay, this may affect the sales and profits of the concern.

In addition, on Friday, the Munich prosecutor’s office imposed a fine of 81.25 million EUR on the manufacturer. This is an out-of-court settlement in one of two investigations into suspected corruption related to a Eurofighter deal for Austria in 2003.

The Munich prosecutors investigate whether Airbus has not given bribes to win the 2 billion USD deal. The company denies the charges. In a statement, prosecutors said they had not found evidence of bribery, but that Airbus had failed to explain the payment of more than 100 million EUR to two offshore companies.