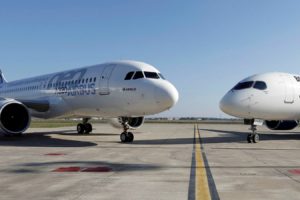 Airbus signed two contacts with Asian customers on the first day of Farnborough airshow. The contacts with carriers from India and Kuwait are for total 37 A320neo aircraft.

Vistara, a carrier from New Delhi, and Airbus signed a letter of intent to acquire another 13 A320neo aircraft, in addition to the existing order book for 21 aircraft. This is reported by Airbus. The airline also assumed the obligation to additionally acquire 37 aircraft from the A320neo family.

The company Golden Falcon Aviation, the supplier of aircrafts of the airline Wataniya Airways, confirmed the order for 25 aircraft of the Airbus A320neo family. The signing of the contract was followed by the Memorandum of Understanding signed earlier, at Dubai Airshow.

Wataniya Airways resumed operation in July 2017 and currently manages a fleet of four A320 family aircraft that connect destinations in the Middle East, Europe, Africa and Asia with the base airport in Kuwait.

The A320neo family aircraft will support the airline’s vision to become the fastest growing and leading airline in the country, the statement added. With more than 6,100 orders received from over 100 customers, the A320neo Family has captured some 60 percent share of the market.