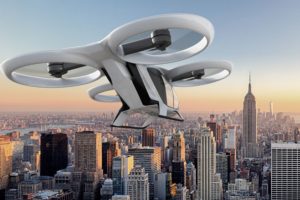 Airbus Helicopters successfully completed the first full-scale testing of the CityAirbus demonstrator. It is expected that this multipurpose electric vehicle for vertical take-off and landing will be used as an air city transport. During the tests, the CityAirbus team checked the operation of the screws in the ring fairing, as well as the power plant with two Siemens engines with a power of 100 KW and all electrical systems of the aircraft.

CityAirbus is a battery-powered aircraft that performs vertical take-off and landing. It accommodates up to four passengers and allows people to fly to airports or railway stations in a busy metropolitan area as quickly as possible, at affordable prices and with the least impact on the environment. Innovative configuration using four screws in the ring fairings improves flight safety and reduces noise.

“We now have a better understanding of the performance of CityAirbus’ innovative electric propulsion system, which we will continue to mature through rigorous testing while beginning the assembly of the full-scale CityAirbus flight demonstrator”, said project manager of CityAirbus, Marius Bebesel.

The initial testing of the demonstrator will be conducted on the ground. In the first half of 2018, the team plans to test the aircraft with engines and electrical systems on. The first flight is scheduled for the end of 2018. At first, test flights will be remotely controlled, and in the future they will be performed by test pilots.

CityAirbus will be able to carry up to four passengers on predetermined routes with a cruising speed of 120 km/h. At the first stages of implementation, it will be controlled by the pilot, which will facilitate the process of certification and adoption of innovative aircraft by users. In the future we plan to switch to fully automatic flight mode.