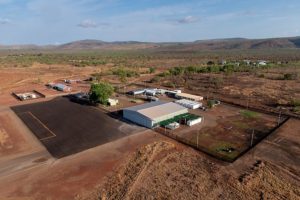 Airbus Defense and Space announced the opening of the first air base for the High Altitude Pseudo-Satellite (HAPS) Zephyr S in the town of Wyndham (Western Australia), which will be used as a launch pad.

Unlimited airspace and favourable weather conditions played a key role in choosing a site for the construction site.

Zephyr is a stratospheric unmanned aerial vehicle (UAV) powered by solar batteries. It can fly at an altitude of about 21 km, inaccessible for regular air traffic, above the clouds and air currents. Zephyr will complement the work of satellites, other UAVs and manned aircraft to ensure stable satellite communications in the field.

“I am pleased to welcome the Airbus team and the Zephyr project in Western Australia. This event is the result of almost a full year of hard work by Airbus and our government to localize this impressive, innovative technology project. Zephyr will open up new opportunities for customers and serve as an impetus for the economic development of East Kimberley”, said Western Australia Prime Minister, Mark McGowan.

“The official opening of the world’s first launch pad for High Altitude Pseudo-Satellite marks the beginning of a new phase for the Zephyr program. We are proud that Australia has become part of the project. This site will become our gateway to the stratosphere and the main air base for Zephyr in the future”, said Jana Rosenmann, head of the direction of unmanned aerial vehicles at Airbus.

The enhanced capabilities of the drone will give impetus to the development of programs for the prevention of natural disasters and the liquidation of their consequences, including monitoring the spread of forest fires or oil spills. The drone will provide constant monitoring of climate change, as well as satellite communications over the most inaccessible areas. In August of this year, Zephyr S spent more than 25 days in the air, setting a new world record for flight duration.