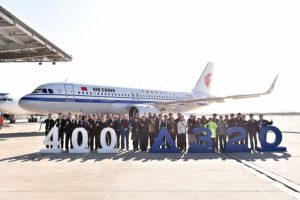 The Airbus plant in Tianjin (North China) completed the assembly of the 400th Airbus A320 aircraft and handed it over to the customer, Air China.

The company Airbus China, which reported on this event, regarded it as a “new milestone” in relations of cooperation and partnership between the Chinese aviation industry and the European aircraft manufacturing concern.

Launched in 2008, the Tianjin plant is a joint venture in which 51% of the shares belong to the Airbus concern and 49% to the Chinese consortium. This plant is the third line of the final assembly of narrow-body Airbus A320 passenger aircraft after similar facilities in Toulouse and Hamburg and first outside Europe.

China is Airbus’ largest market among all countries in the world, which accounts for about a quarter of all company orders. In 2017 alone, 176 new aircraft were handed over to Chinese customers. For 8 years in a row, this indicator has not dropped below 100 aircraft. The annual volume of cooperation between Airbus and the Chinese aircraft industry has exceeded 640 million USD and is expected to reach 1 billion USD by 2020.