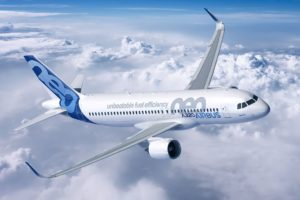 Airbus signed a memorandum of understanding with the American investment fund Indigo Partners for the purchase of 430 aircraft from A320neo family, within the framework of Dubai Air Show. The acquired aircraft will be distributed among four airlines operated by the fund: Frontier Airlines (USA), JetSMART (Chile), Volaris (Mexico) and Wizz Air (Hungary).

“This impressive order for 430 aircraft confirms our optimism about the further growth of the budget air travel market, as well as the confidence in the A320neo family, which will be the basis of this growth”, said the statement of American investment fund Indigo Partners. “Our airlines know that a good airplane and the right business plan are the main ingredients for successful development. We are confident that the ordered aircraft will allow our airlines to offer passengers even more comfort in flight and more attractive rates”, adds the statement.

The ordered aircraft include 273 A320neo and 157 A321neo with a total catalog cost of 49.5 billion USD, which is the largest single order received by Airbus in the company’s history. In addition, thanks to the new agreement, as well as previously placed orders for 427 aircraft from A320 family, Indigo Partners is becoming one of the world’s largest customers of narrow-bodied Airbus aircraft.

“Indigo Partners has been the customer of our aircraft for many years”, said the Commercial Director of Airbus, John Leahy. “The order received today is impressive, but the fact that it is placed by a professional aviation team that knows our product well is especially pleasant. We are pleased that our aircraft will fly on different continents, offering operators low operating costs, long range and the most spacious cabin”, added he.