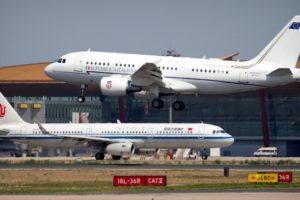 The European aircraft manufacturer Airbus reported a profit increase in the first quarter of the year amid good production data for the A320 passenger aircraft, which is the main competitor of the troubled Boeing 737MAX.

The company delivered 162 aircraft during this period, including 126 A320, which, like the 737 Max, engine defects were detected, questioning the future of this series after the fatal two crashes.

Airbus earnings before interest and taxes (EBIT) jumped to 549 million EUR (614 million USD) from 14 million EUR a year earlier, giving a solid start to the mandate of the new CEO Guillaume Faury, who replaced the long-standing manager Tom Enders on April 10th.

However, fluctuations in currency exchange rates and political tensions partially eroded the results of the European aircraft manufacturer for the first quarter. The company’s net profit fell by 86% to 40 million EUR. Just the suspension of arms exports from Germany to Saudi Arabia cost 190 million EUR. Saudi Arabia had ordered a border security system from a company that could not be delivered. The cost of abandoning the prestigious A380 project is now over planned. The fluctuations in the dollar exchange rate must be added as a negative factor, as Airbus pays its 135,000 employees mainly in euros but sells its machines in dollars.

Although some 737 Max owners have indicated they are considering moving to the latest A320neo, the Airbus said it did not accept any additional orders as its production capacity did not allow it and the schedule was filled for the next few years.

However, Guillaume Faury said the passenger airline market was “stable” and that the company was going to provide between 880 and 890 aircraft this year.

The problems surrounding the Pratt & Whitney engines, which is being used for the A320neo, seems to have been resolved and is likely to begin shipping recovery after the early termination of the A380 double-decker, which contributed to the reduction in deliveries of 58 aircraft in the quarter.

Airbus still faces difficulties in terms of increasing supply of the A321, an extended version of the well-known A320, due to cabin problems. The company managed to sell only three of the A330neo model due to a delay from the main supplier Rolls-Royce Holdings.

The new CEO believes that the company is on the right track. The delivery of 880 to 890 passenger planes and a 15% increase in adjusted operating profit (EBIT) are still possible this year.