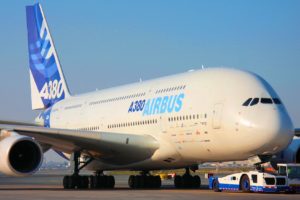 Airbus reported high-than-expected profit in 2017 with relatively stable revenues. The Airbus revenue in 2017 amounted to 66.8 billion EUR, compared to 66.6 billion EUR an year ago, taking into account the increased number of aircraft deliveries. However, the company suffered charges of 2 billion EUR due to changes in its structure.

The Airbus revenue from the civil aircraft production unit increased by 3.5% due to a record number of aircraft deliveries – 718 units. During the reporting period, customers received 558 narrow-bodied aircraft of the A320 family, 78 from A350 XWB, 67 from A330 and 15 from A380.

The revenue of the helicopter construction division showed a slight decrease, as the company supplied 409 helicopters, against 418 in 2016. The Defense and Space revenue decreased by about 1.7 billion EUR, which reflects the negative impact of changes in the company’s structure, but was 7% higher at a comparable level due to success in the military equipment segment. The net income was 2.873 billion EUR, against 0.995 billion EUR in 2016. The earnings per share (EPS) amounted to 3.71 EUR against 1.29 EUR in 2016.

“We surpassed all targets set for 2017, thanks to excellent operating results, especially in the last quarter”, said the CEO of Airbus, Tom Enders. “Despite a number of difficulties with the A320neo engines, we continued to increase production volumes and put a record number of aircraft. As part of the A400M program, we have made progress in terms of performance and technical characteristics, and agreed on new baseline parameters with government customers, which will help to significantly reduce the risks of the program. This is demonstrated by substantial one-time payments. The high results achieved in 2017 reflect payment of dividends, which grew by 11% compared to the previous year. This gives us confidence that we have created a reliable foundation for further increasing revenues and cash inflows”, added he.

Airbus commented that the good dynamics was observed in the Defense and Space division in the military aircraft segment. Among the key orders are 22 light and medium transport aircraft, five A330 MRTT tankers, and a contract for the supply of Eurofighter fighters to Kuwait.

Airbus is a European multinational corporation that designs, manufactures, and sells civil and military aeronautical products worldwide. In addition to its primary civil aeroplane business, the company has two divisions for other products and services: Defense and Space and Helicopters, the latter being the largest in its industry in terms of revenues and turbine helicopter deliveries.