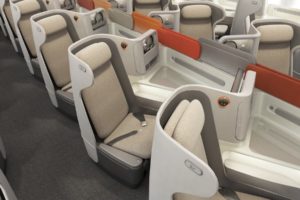 Salons of modern passenger aircraft are completed by aircraft manufacturers at the construction stage. The registration of salons, the list of necessary equipment, the number of seats – all this is agreed with the buyer of the aircraft in advance. On the already assembled aircraft, the configuration of the cabin can be changed, but this will require additional and often has serious costs.

The development of a modular cabin for installation on cargo aircraft is being carried out by Airbus subdivision A3 in the framework of the Transpose project. The concept is currently being tested on the full-size fuselage model of the Airbus A330-200F cargo aircraft equipped with standard cargo fasteners and roller loading systems. The concept of Transpose involves the creation of universal plug-in modules, which can be installed inside cargo planes through loading doors. Such modules can be fixed using a standard cargo securing system. In this case, all modules that have universal channels for various communications can be connected to each other.

In the cargo compartment of the transport plane Airbus A330-200F, up to 12 plug-in modules can be placed. In the form of prototypes, the A3 already tests a standard passenger module with seats, a bar, a gym, a workstation, a sleeping compartment and a game module for children. It is assumed that each of the modules can be equipped with the necessary equipment and furniture in advance in accordance with the planned flight.

The preliminary design of the new universal airplane is made according to the classical scheme of a twin-engine high-wing with single-tail and two ventral crests. In passenger equipment, the aircraft will be able to carry up to 50 people, and in the transport equipment – up to six tons of cargo. The flight range with passengers will be about 1,500 km.