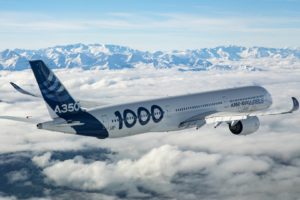 Airbus sold a total of 431 aircraft during the international air show in Farnborough, UK. The orders received include firm contracts for the supply of 93 aircraft, as well as memorandums of understanding for the purchase of 338 aircraft.

“The orders received at the air show once again demonstrate the high interest of customers to our products from completely different segments: from an airplane with a capacity of 100-150 seats (A220-300) to A350 XWB, which is designed to accommodate 250-370 passengers”, said the commercial director of Airbus, Eric Schulz. “In addition, new opportunities appeared to operate the A380 aircraft from the secondary market. We are full of optimism and are confident that our aircrafts best meet both the current and future needs of customers”, added he.

Airbus is a European corporation, registered in the Netherlands and trading shares in France, Germany and Spain. It designs, manufactures and sells civil and military aeronautical products worldwide and manufactures in multiple countries both inside and outside of the European Union. In addition to its primary civil aeroplane business, the company has two divisions for other products and services: Defence and Space and Helicopters, the latter being the largest in its industry in terms of revenues and turbine helicopter deliveries.