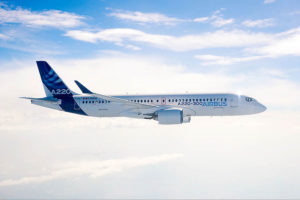 The European aircraft manufacturer Airbus started construction of a new plant in Mobile, Alabama, USA. In the new factory, the company will organize the assembly of aircraft A220 (Bombardier CSeries). The assembly line will have to meet the growing demand in the United States for the A220.

The new assembly line, which is the second factory of the European aircraft manufacturer in the US, will facilitate the production of A220-100 and A220-300 aircraft for the US customers. Aircraft production is scheduled to begin in the third quarter of 2019, and the first deliveries of the A220 aircraft assembled at the new plant are scheduled for 2020.

To date, Airbus has a portfolio of orders for more than 500 A220 aircraft.

Airbus A220, previously known as Bombardier CSeries (or C Series), is a family of narrow-body, twin-engine, medium-range jet airliners marketed by Airbus but designed and originally built by the Canadian manufacturer Bombardier Aerospace. Following Airbus involvement the aircraft are built by CSeries Aircraft Limited Partnership (CSALP).