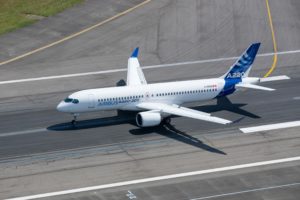 Airbus Helicopters starts manufacturing parts for the A350 doors using 3D printing technology, which can significantly reduce the weight of the finished product, as well as save resources and time. Currently, the Airbus Helicopters plant in Donauwerth produces doors for all Airbus aircraft, being one of the company’s suppliers.

The printer EOS M 400-4 is used production of a shaft of door’s blocking. First, a 3D model of the part is created on the computer, then all the data is processed by the printer system and the layer-by-layer formation of the part from titanium powder by melting and further sintering under the action of a high-precision light laser. The optical system of which precisely outlines the model in this section.

So, layer by layer, the part grows until it is completely created. Using this method allows to produce lighter parts, reduce production time, industrial waste, as well as make more complex parts.

So, for example, the shaft of door’s blocking printed on the printer is 45% lighter and 25% cheaper than the same part produced in the traditional way. Considering that about 16 such parts are installed on each A350, using 3D printing in production will save about four kilograms of weight per aircraft.

At full capacity, Airbus Helicopters plans to produce about 2,200 of these components per year. Mass production is scheduled to begin in 2019 after completion of the certification process. It is expected that the first 3D printed door will be installed on the A350 already in 2020.

Newer PostAirbus A320 of AirAsia India suffered problems with retracting landing gear after takeoff from Goa
Older PostRussian airlines report a loss of 40.2 billion rubles in the first half of 2018