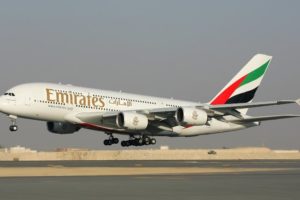 Airbus is about to stop production of A380 aircraft. The company is trying to make a deal to deliver the aircraft to Emirates, but if it fails, it will stop producing this model.

The A380 is the largest passenger airplane in the world, capable to carry about 500 people and has been in operation for only 10 years. But its sales are weak. According to the calculations of Airbus, the development of this model was worth 11 billion EUR.

Emirates is one of the biggest fans of the A380 and has already ordered 142 planes. So far, the airline has received 100 of them.

Airbus and Emirates are currently negotiating delivery of another 36 aircraft worth 16 billion EUR. The talks have begun during the Dubai air show and are currently stagnant.

The airline needs a guarantee that production will last for another decade to protect the investments made so far. This puts Airbus in difficulty – if the production of the A380 stops, the company risks losing one of its largest customers.

Emirates can appeal to rival Boeing, as the US President Donald Trump exerts pressure on that.

Airbus needs another 30 orders to keep the airplane open for another 10 years.