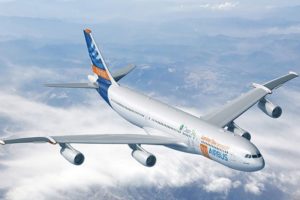 Blade, an acronym for Breakthrough Laminar Aircraft Demonstrator in Europe, which is project financed by the European Union. This research effort utilizes the first-ever A340 jetliner produced by Airbus, with its outboard wings replaced with approximately 10-meter-long laminar wing panels. These panels represent about two-thirds of the wing size on a short- or medium-range airliner, for which the laminar flow technology is deemed best suited.

“We began by opening the flight envelope to check that the aircraft was handling correctly. We achieved our objective to fly at the design Mach number, at a reasonable altitude and check everything was fine. We also checked that the FTI was working as expected, to identify further fine-tuning for the next flights”, said the flight-test engineer of the test A340 aircraft, Philippe Seve.

A key goal of Blade centers on measuring tolerances and imperfections present while sustaining laminarity. To that end, Airbus plans to simulate every type of imperfection in a controlled manner, revealing by the end of the campaign the tolerances for building a laminar wing. Plans call for the Flight Lab to fly for some 150 hours in the next few months.