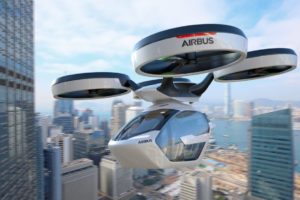 Airbus plans to test an automated unmanned delivery system with drones in the first half of 2018. The first demo flight of such an unmanned device took place on the territory of the National University of Singapore.

In April 2017, SingPost, the postal operator, became the logistics partner of the Skyways project. The parties plan to test the delivery of small parcels using unmanned drones on the campus of the National University of Singapore. The parcels are first automatically loaded onto the drone using a robotic manipulator. Then the drones automatically deliver parcels by air to the points of delivery on the campus, where orders are transferred to the storage rooms for further issuance. The drones will fly through dedicated air corridors to avoid collisions. Control over the flights will be the ground control center.

The modern drone are a complex high-tech product developed on the basis of technical and engineering experience of Airbus Helicopters in the field of aircraft and Airbus Defense and Space in the field of batteries and control from the command center. The system architecture of aircraft, first developed and approved in France, has been refined, designed and implemented in Singapore.

“At the initial stage of the testing, five or six drones are planned to be used for several months, which will allow us to collect the necessary data and analyze them”, said the head of the Airbus Helicopters design bureau and Skyways project manager, Leo Jeoh. “In Singapore, various delivery services are already effective, so the country provides a good platform for the introduction of new technologies and business models. The support of the Office of Civil Aviation of Singapore and the state that actively accompanies the introduction of innovations has provided the ideal conditions for the development of the product and its launch faster than in other regions”, added he.

In the future, the air delivery system will be able to save lives, delivering medicines throughout the city without using the road infrastructure. Drones can also promote business development, simplifying the process of delivering goods to customers.

“To win the confidence of regulators and end users is a priority task in the effort to make air mobility in the urban environment a reality. I am confident that Airbus will play a decisive role in the transition from ground transportation to air in urban areas”, concluded Leo Jeoh.