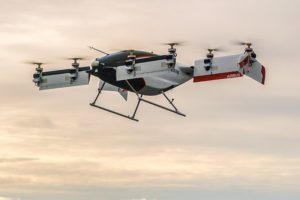 The Airbus’ unmanned aerial taxi completed its first flight on January 31, 2018. The test were carried out on a full-scale prototype of the aircraft, developed by the A3 division of the European aircraft manufacturer.

The development of the air taxi of the Vahana project began in February 2016. The aircraft with vertical take-off and landing is made according to the scheme of convertoplane with front and rear turning wings. On the consoles of each wing there are four electric motors with air screws.

According to preliminary plans, Vahana will transport either one passenger or some cargo. The unmanned convertoplane will receive a system of avoiding collision with obstacles and other aircraft. Performing flights of air taxi will be strictly on predetermined routes, slightly deviating from them only in case it is required to avoid a collision.

During the first flight, the unmanned aerial taxi prototype, called Alpha One, flew vertically to a height of five meters, hovered for 53 seconds and smoothly landed. Soon after landing, the aerotaxi performed the second flight. The tests were carried out at the A3 aerodrome in Pendleton, Oregon. The tests were carried out with a full-size prototype of aerotaxi, measuring 6.2 m in length, 5.7 m in wingspan and 2.8 m in height. The maximum takeoff weight of the device is 745 kg. Other details of the tests are not specified.

Earlier, the A3 unit announced that the prototype of the Vahana unmanned aerial taxi prototype will be tested for three months. They are planned to be completed by a full-fledged flight, in which the aircraft will have to fly vertically, switch to a horizontal flight, evade an unexpected obstacle, switch to a vertical landing mode, evade an obstacle on the ground and make a landing.

Newer PostBelarusian airport of Minsk recognized Utair as the most punctual carrier for 2017
Older PostBoeing signed 6.5-billion-dollar deal with the US Department of Defense