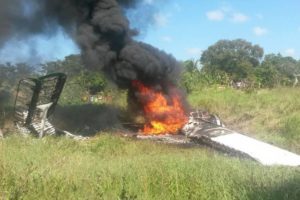 Two people were seriously injured after aircraft Antonov An-2 crashed near La Paragua Airport in Venezuela. The airplane suddenly lost altitude shortly after takeoff and impacted a field near the airport. The both pilots escaped from the burning aircraft, but received serious injuries during the crash and were transported to the local hospital.

After hitting the ground, the aircraft Antonov An-2 caught fire and was completely destroyed. At the scene of the accident were deployed local firefighters and rescuers, who extinguished the flames. The two people were hospitalized for medical treatment.

The local authorities initiated investigation for the root cause of the accident. The aircraft was traveling from La Paragua Airport in Bolívar state to Canaima. The injured people on board were identified as the captain of the aircraft, Miguel Rebolledo (43) and co-pilot Nestor Rodríguez.

Antonov An-2 is a Soviet mass-produced single-engine biplane utility/agricultural aircraft designed and manufactured by the Antonov Design Bureau beginning in 1946. Its remarkable durability, high lifting power, and ability to take off and land from poor runways have given it a long service life. The An-2 was produced up to 2001 and remains in service with military and civilian operators around the world.