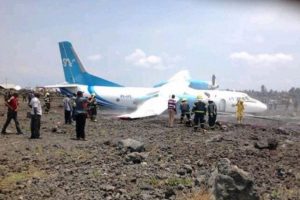 Cargo aircraft Antonov An-26 crashed during emergency landing at Goma Airport in the Democratic Republic of the Congo. The aircraft was climbing out of Goma en route to Bunia, when one of the engine failed. The crew diverted back to Goma airport runway 35, but aircraft touched down at about mid point of the runway and there was not enough length to stop on the track. The plane stopped at lava field of 2000 m north of the runway, crashing and suffered serious damages. Fortunately all the crew survived, but suffered slight injuries.

The emergency service were deployed at the scene of the accident immediately and all the people were evacuated. The aircraft suffered serious damages, including fractured right hand wing, as well as collapse of nose and right main gear.

The investigation for the root cause of the accident is under way. The operator of the aircraft is Serve Air Cargo and plane was re-registered in 2017.

Antonov An-26 (NATO reporting name: Curl) is a twin-engined turboprop civilian and military transport aircraft, designed and produced in the Soviet Union from 1969 to 1986.