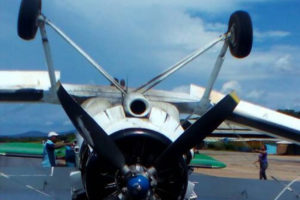 Aircraft Antonov An-2R crashed at Playa Linda airport in Bolivar, Venezuela, causing one death. The circumstances around the accident are unclear and under investigation of the local authorities and police, but the airplane has overturned at the runway. The pilot on board suffered fatal injuried and died in the hospital. There were no reported injuries on the ground, but aircraft also suffered serious damages. Following the accident at the site arrived rescuers and the Bolivarian National Guard (GNB) to assess and help with the damaged aircraft.

The circumstances around the accident are unclear as authorities are not releasing much information, due to the following investigation. The National Director of Civil Protection, Jorge Galindo, the aircraft was caught by strong left front wind and then turn in the middle of the runway.

The single-engine aircraft Antonov An-2R was operating under the Venezuelan flag with registration YV2195.

The Antonov An-2 is a Soviet mass-produced single-engine biplane utility/agricultural aircraft designed and manufactured by the Antonov Design Bureau beginning in 1946.