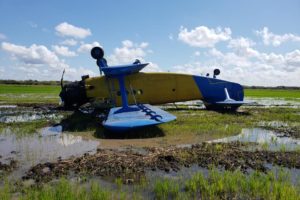 Aircraft Antonov An-2 made an emergency landing in wetland terrain in Alonso de Rojas, Cuba. The airplane suffered a loss in engine power during flight and the pilot made a forced landing on an open field. The aircraft came to the rest inverted, sustaining substantial damage. Fortunately, there were no reported fatalities to the occupants on board.

The accident was reported to local authorities. At the scene were sent police officers and firefighters, who will initiate an investigation for the root cause of the crash.

The circumstances around the accident are unclear.

Antonov An-2 is a Soviet mass-produced single-engine biplane utility/agricultural aircraft designed and manufactured by the Antonov Design Bureau. The An-2 was designed as a utility aircraft for use in forestry and agriculture. However, the basic airframe is highly adaptable and numerous variants of the type have been developed. These include hopper-equipped versions for crop-dusting, scientific versions for atmospheric sampling, water-bombers for fighting forest-fires, flying ambulances, float-equipped seaplane versions and lightly armed combat versions for dropping paratroops.