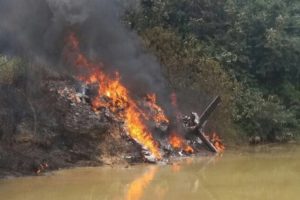 Light aircraft Beechcraft F35 Bonanza crashed and caught fire near Itaituba in Brazil, killing three people on board. The circumstances around the accident were not clear, but according to preliminary information the aircraft had technical failure in flight and fell on the ground, being engulfed by flames.

The plane crashed on the banks of a river that cuts through the Crepurizao region. The area is made up of gold mining fields and the aircraft was transporting gold buyers.

“There were three people on board – one pilots and two passengers. The bodies of the three people were taken out of the fire and are being moved to Itaituba”, said Vicente Gomes from the local Aviation office.

The local authorities initiated investigation for the root cause of the accident. There were no injured people on the ground and no report environmental pollution.

Beechcraft Bonanza is an American general aviation aircraft introduced in 1947 by Beech Aircraft Corporation of Wichita, Kansas. The six-seater, single-engined aircraft is still being produced by Beechcraft and has been in continuous production longer than any other airplane in history. More than 17,000 Bonanzas of all variants have been built, produced in both distinctive V-tail and conventional tail configurations.