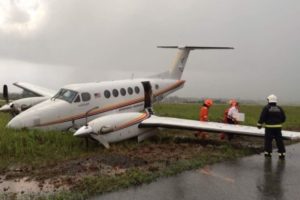 The business turboprop aircraft Beechcraft King Air 250 sustained substantial damage after runway excursion during landing at Kuching Airport, Malaysia. The aircraft carrying six passengers from Mukah, including a Sarawak minister, veered off the side of the runway at the Kuching International Airport, while landing in heavy rainfall. Following the accident, the nose landing gear collapsed and both propellers were damaged.

All passengers and crew escaped from the crashed aircraft Beechcraft King Air 250 without reported serious injuries. They were examined by medical teams and released without hospitalization.

Fire and Rescue Department response teams from the Tabuan Jaya and Batu Lintang stations were immediately dispatched to the scene to prevent development of the accident.

The accident forced the Kuching International Airport to suspend operations Malaysia Airports Holdings Bhd senior manager Mohd Nadzim Hashim said work to remove the aircraft is estimated to take about two hours before normal operations at the airport can be resumed.

Beechcraft King Air 250 is the most popular business turboprop in the world, providing cutting-edge touchscreen avionics technology, greater passenger comfort and enhanced payload options to deliver more people to more places in unprecedented comfort. The enhanced payload option provides increased mission flexibility. An impressive maximum range of over 1,500 nm is possible with the engines PT6A-52. The Beechcraft King Air 250 improves on its predecessors with the incorporation of composite winglets and propellers that yield improved take-off performance, climb and a higher 310 kts max speed.