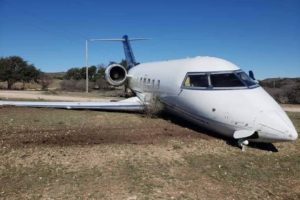 Aircraft Bombardier Challenger 601 suffered runway excursion during landing at runway 35 of Ox Ranch Airport in Texas, USA. The aircraft was performing private or charter flight to Texas with 9 people on board, but during landing, the main gear failed and the aircraft went off the runway. None of the people on board suffered serious injuries, but aircraft sustained substantial damage to the fuselage and the Air Driven Generator.

The accident was reported to the local authorities with police and security officers arrived on time and investigated the root cause of the aviation crash. According to preliminary information, the accident was caused by technical failure and pilots were unable to make a safer landing.

Fortunately, there were no reported serious injuries during the accident.

The operations of Ox Ranch Airport were suspended during the day.