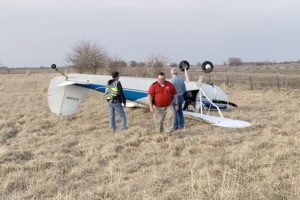 Small aircraft Cessna 140 had a soft crash at open field terrain in Harvey County due to a loss of engine power. The airplane came to rest inverted, sustaining unreported damage, but the sole pilot on board escaped without serious injuries.

The accident happened on a few meters from Newton City-County Airport. Тhe airplane was attempting to land at the airport when it lost power and the pilot was forced to land on a rural field. Due to peculiarities of the terrain, the airplane struck the fence and a small tree. The aircraft flipped over the nose and came to rest on the top.

Fortunately, there were no reported injuries during the accident.

Cessna 140 is a single-engine, two-seat, conventional landing gear (tailwheel), light general aviation aircraft. It was originally equipped with a Continental C-85-12 or C-85-12F horizontally opposed, air-cooled, four-cylinder piston engine of 85 hp (63 kW). The Continental C-90-12F or C-90-14F of 90 hp (67 kW) was optional, as was the 108 hp (81 kW) Lycoming O-235-C1 engine, an aftermarket installation authorized in the type certificate. This model had a metal fuselage and fabric wings with metal control surfaces.